Security in and around Peshawar airport put on high alert amid terror threat
November 21, 2017 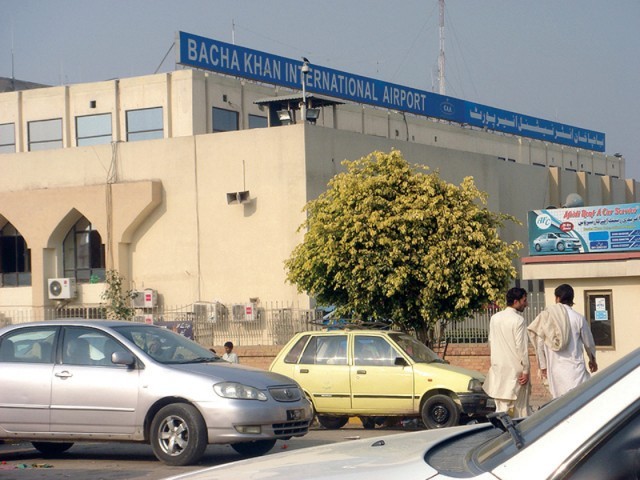 Airport authorities cautioned of a possible terror attack over passenger plane – most likely on an international flight. PHOTO: FILE

PESHAWAR: Intelligence agencies have alerted airport authorities at the Bacha Khan International Airport (BKIA), Peshawar of a possible terror attack over passenger plane – most likely on an international flight.

This is not for the first time a threat alert has been issued, but unlike previous cautions, the Civil Aviation Authority (CAA) said an ‘international’ flight could be targeted, officials privy to the threat alert told The Express Tribune.

CAA senior officials, speaking on the condition of anonymity, said the airport management has taken foolproof measures and is in contact with law enforcement agencies including the Pakistan Air Force (PAF), Pakistan Army and Airport Security Force (ASF) besides other relevant authorities to thwart any possible attack.

“We receive such alerts in routine and they are always taken seriously, but this time, extra precautionary measures have been taken,” a senior CAA official said.

Another CAA official said the alert was not only for BKIA but all such facilities across the country. However, since BKIA fell within their domain, necessary steps have been taken to ensure safety of passengers, installations and the facility.

“Our measures to secure people, facility and installations are not threat based but we have been working on it for over two years and have deployed over 600 Frontier Constabulary personnel in the funnel area alone,” a senior security official dealing with the airport security told The Express Tribune.

An airport security policy, he also said, was adopted in 2015 since high level threat alerts were shared for Peshawar as well as Quetta airports, adding that the ASF was supposed to secure airports from inside where other law enforcement agencies to protect the facility from outside areas surrounding the airports.

“But despite having been adopted in 2015, we are collectively putting all our efforts and 100% counter measures have been adopted,” the official informed, adding, “You don’t have to worry about thing since we are prepared.”

None of the CAA officials agreed to be quoted for an official version despite repeated requests at all levels.

Night operations have already been suspended since June 2014 after gunmen fired on a Pakistan International Airline (PIA) passenger plane as it was landing at BKIA killing a woman and injuring two others, including a crew member.

On November 8, the CAA refused to allow a Shaheen Air flight to land at the BKIA and the flight NL-724 was diverted to Lahore.
Top
Post Reply
1 post • Page 1 of 1